Late on Sunday afternoon, during the second day of the BodyHacking Con event at the Austin Convention Center, I saw a Susan Butler getting an RFID chip from Dangerous Things implanted under her skin at the edge of the trade show. The skin on her hand was prepped, the area was examined and a hypodermic needle was used to insert the chip.

A large group of people was clustered behind her, most seemingly waiting their turn to get the same chip implanted under their skins for free, as usually that same chip installation started at around $60, plus the labor involved in the procedure. With that chip they would be able to unlock door, or perhaps do a variety of other things, depending on how they programmed the chip.

Near the chip implant booth, there were two adults wearing prosthetic arms. A woman had a translucent arm while the man had a metal-looking  an arm lit with a bright blue lights that wouldn’t look out of place in a science fiction movie. 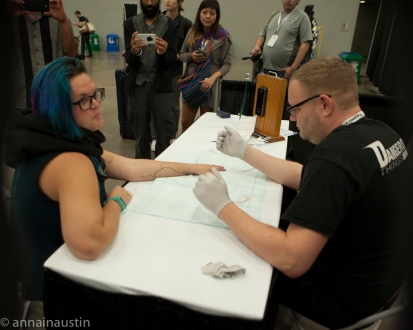 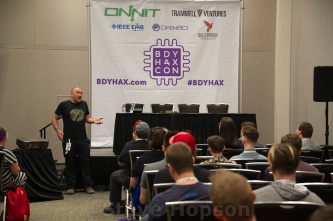 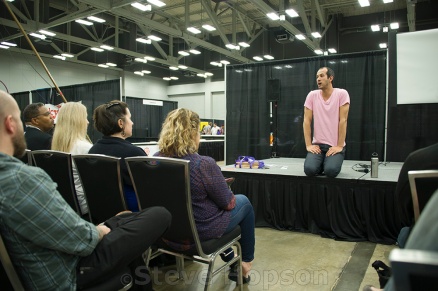 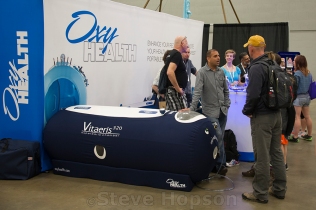 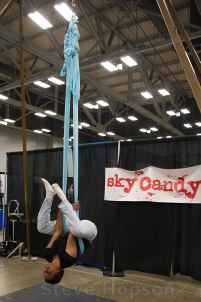 On that same expo show floor, my husband had just spent time assembling an LED bow tie (for really alternative black-tie) someone was relaxing in a hypobaric chamber and people were helping assemble plastic robotic hands.

Other people on the trade show floor had stopped by the booth that allowed them to experience what it is like to be colorblind, and had tried the consumer grade glasses that allow the colorblind to see colors, as you can see in this video.

At the same time, just a few floors above in the Convention Center, a panel discussing “Cyborg Pride and Identity” was underway, where Quinn Norton, Neil Harbisson and Rich MacKinnon were delving into the issues around cyborg rights and transhumanism.

The most distinctive panelist on the that three-person panel was Neil Harbisson, who had an electronic eye implanted in his skull to correct his severe congenital colorblindness. You can hear his story and see an example of how he hears colors in this Ted talk.

In many ways BodyHacking Con explored and redefined the margins of human augmentation and what you can do with your own body. The even even featured a demonstration of a  brain computer interface  a.k.a. an “Open BCI” where a man wearing a helmet controlled a laptop mostly via his brain waves.

More importantly, several people at this event people were open to discussing what these changes to the human organism means for society going forward.

The event explored many facets of the body hacking community. On one end this included everything from the DIY labs of the Grinder community where people have gotten magnets implanted in their fingers and there was talk of Elizabeth Parrish experimenting on her own DNA at BioViva.

On the more western-medicine end of the event, there was a talk from Paul Abramson, M.D.,who has a high -touch San Francisco medical practice that has started using the drug Ketamine to treat chronic pain and depression to people who are willing to pay for out -of- network services to treat their problems.

It’s a whole new world of what you can do with the human body these days.

“We’ll see you next year at the World’s First International Cyborg Pride Parade” quipped panelist  Rich MacKinnon at the end of the panel on Cyborg Pride.

Anna Hanks is a journalist who writes at www.annainaustin.com and can be found on Twitter as @annainaustin